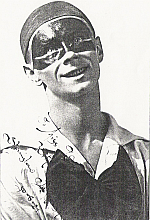 Stanislas Idzikowski was a teacher, dancer, choreographer and co-author with Cyril Beaumont of the Cecchetti Manual.

Born in Warsaw in 1894, he studied under Gilbert, Vilzak and Cecchetti. Formerly with Anna Pavlova’s Company, he joined Diaghileff’s Company in 1914, remaining until 1926, dancing many leading roles, including Harlequin in Carnaval, Petrouchka, the snob in La Boutique Fantasque, the Spark in The Three Cornered Hat and many others.

He rejoined Diaghilev in London in 1928 and toured Great Britain and danced in every European capital. He danced with the Vic Wells Ballet in 1933 creating one of the leading roles in Les Rendezvous, and dancing Harlequin in Carnaval, Blue Bird and Grand Pas from Aurora’s Wedding, etc.

He taught at his own studio in London, with Madame Wanda Evina his faithful friend and pianist. Many famous dancers were numbered among his pupils. He also worked for the R.A.D. and retired after the death of Madame Evina.

I first made contact with Idzi, as I now call him, in 1947. I had recently been made a Member of the Junior Sadler’s Wells Ballet Company at the Sadler’s Wells Theatre on Rosebery Avenue in London England. The occasion was Twelfth Night, it was customary to have a special celebration in the London theatres on this night.

It was also customary to invite a celebrity to these occasions. Idzikowski was the celebrity for that night in 1947. I was introduced to him at the beginning of the evening, backstage. As I approached Idzi, he smiled, because I was a dancer in the company, but also because I am six feet tall and he came up to my shoulders in height. I reached down, to shake his hand.

My next encounter was with the Metropolitan Ballet Company, on tour in the British Isles. Idzi had been brought in to teach Spectre de la Rose to the company. I was not cast to dance that role, but I managed to observe the process from the back of the front of house.

He began by opening a bottle of Rose perfume for the cast to smell. Spectre is for two dancers, but six were learning it. He said that he wanted them to feel the aroma. This was a daily process. Later in my time with the Metropolitan Ballet, I asked to dance that role, and, by default, one of the dancers was sick, and I did make that role, part of my repertoire.

Study with Idzi in London was another matter. The word amongst the dancers was, “if you want to learn how to move quickly, do class with Idzi.” I tried, but I could not keep up with him, I gave up eventually and went back to Vera Volkova. He taught class in a suit, with the stiff collar, the vest, and spats and street shoes. With all of this on, he could still do a double tour en l’air and land in a perfect 5th.

I did not get to know this man, I knew his reputation from books and from other dancers. Why Idzi? That was what Madame Evina called him. He was in most cases, the understudy to Nijinsky, but was as good, in every way, as the great man himself.

“During my unusually long career I must surely have attended more classes with more teachers than any other dancer in history. Even in the early years at Sadler’s Wells we had several guest teachers. My favourite was Stanislas Idzikowski, affectionately known as Idzi, a brilliant dancer who had been with the Diaghilev Ballet. He was diminutive, dapper and precise, speaking rather good English with a clipped Polish accent. Severe but never unkind, he knew exactly what he expected of his students and explained clearly how to achieve it. He demonstrated all the steps himself, even in pas de deux class, and he could deftly swing one into a lift supported only with one arm. What incredible strength and knack to partner, so airily, lumpy teenagers taller than himself! Forty years later [1976] he is still as slim and precise as ever, his face scarcely changed at all. I do not remember ever seeing him without a waistcoat to his neat grey suit.”

Memories from Brian and David Scott:

Brian: My main impression of Idzi as we affectionately called him was that he was always well mannered and a gentleman though at times we gave him good reason not to be!!! He was always impeccably dressed, neat and shoes polished to perfection; I could never imagine him to be muffled no matter what the difficulty. He would teach what I thought was an extremely difficult enchaînement and after an unsuccessful attempt he would look sad and shake his head and say, “NO, NO, gentlemen, please, it is not difficult” and he would demonstrate with speed and accuracy ending without the least displacement of his dress nor even out of breath. We would then see it wasn’t difficult after all. He would stand quite close to me and ask for a double tour, 5th to 5th, straight up and down, and he would explain how. Then I would take a step back, he would take a step forward, this was repeated until the wall was behind me, he would say plié, and, I was afraid of hitting the wall, and I would not dare hit Idzi so I went straight up and down. Good, he would say. I always remember Madame Evina, his pianist who had been a dancer with Idzi in the Diaghilev Company; she was very petite and looking of the past era. She always gave wonderful introductions to everything and it used to amuse me that sometimes as you passed the piano after an enchaînement or whatever she would whisper a correction which you had to acknowledge very surreptitiously because if Idzi saw he would glare at Madame Evina. His classes and directions were very clear and made you think, you were always informed not only on what was necessary and logical but the quality of movement needed. I never thought of them as “Cecchetti” classes. I don’t think anyone did, it wasn’t until much later that I realized that fact.

David: Both Brian and I had a background of Cecchetti so I was prepared for Idzikowski’s style and enchaînement but I thought that class would be more free as all professional classes were in London at that time. So after the first surprise it took a while to get used to the short, fast set barre and then repeating it all again in the centre. For many classes I ‘fell about’ especially if we had just returned from a month’s tour, but in the end it came together and I got great benefit from it. He tailored his enchaînement to professionals and his classes were built up during the week finishing with the most difficult on the last day. The enchaînement were always repeated four times which was another thing which gave us great benefit after a while. Madame Evina always built up the music to push us through the fourth time, and sometimes we really needed it. Another benefit was that for the boys the fourth time always finished with a pirouette. Idzi had the most beautiful arms in demonstrating adage; I have never forgotten his elegance. He was also a great believer in getting us to jump straight up and achieve height from a stationary position. I remember one day he was standing by the upright piano exhorting us to jump, when suddenly he did a demi-plié and the next instant he was sitting on top of the piano with not a hair out of place. I am sure that it is not necessary to describe how we felt.