Olga Raster: Master of the Russian Ballet – The Memoirs of Enrico Cecchetti

Olga Raster: Master of the Russian Ballet – The Memoirs of Enrico Cecchetti 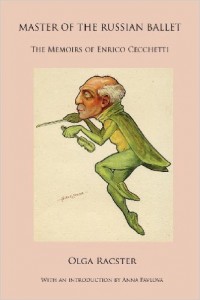 Cecchetti was an Italian dancer and choreographer and one of the greatest teachers in the history of ballet. Born in a theatre dressing room in 1850, he was a pupil of Giovanni Lepri, and made his stage debut at La Scala, Milan in 1850, soon afterwards appearing in London and St. Petersburg. In 1890 he became a dancer and teacher in St. Petersburg, moving to Warsaw in 1902, and then returning first to Italy and later to Russia. His pupils included Pavlova, Preobrajenska, Egorova, Karsavina, Kschessinska, Fokine and Nijinsky. He was the teacher of Diaghilev’s Ballets Russes on its formation, and opened a studio in London in 1918. All the major dancers in Diaghilev’s company passed through his hands, his later pupils including Markova, de Valois, Massine, Lifar, and Dolin. He returned to Milan in 1923 as director of the La Scala Ballet School, dying in 1928. Cecchetti was both a revered and much loved figure, and these memoirs, written in collaboration with him and first published in 1923, give a fascinating and revealing picture of one of the most important figures in the history of classical ballet.