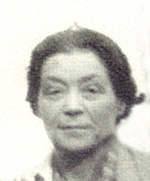 Mabel Ryan, a South African, was born in Cape Town. She went overseas to study ballet and danced with the Pavlova Company.

In the 1930s the Craske-Ryan School opened at 26 West Street, off Cambridge Circus, London, England. Both Margaret Craske and Mabel Ryan had been pupils of Cecchetti and were totally dedicated to his method and memory. The school became the world centre for the Cecchetti Method.

Many famous dancers of the time, performing or residing in London attended the professional classes in the mornings that were taught by Margaret Craske, with Mabel Ryan often participating as a pupil. Miss Ryan taught the Intermediate and Elementary students, (now Adv. 1 & 2 or Inter. & Adv.) and the children’s classes which were held twice a week.

The personalities of the two great teachers complemented each other perfectly – Craske was admired, respected and loved by her students but many of us have admitted that we were rather overawed by her. Mabel Ryan was more emotional and outwardly affectionate. Miss Ryan’s corrections were frequently prefaced by “Maestro used to say….”

Though she expected hard work and improvement from her pupils, she knew when praise and encouragement were most needed and corrections were given with humour and kindness. One of her frequent remarks was “It is when I don’t scream at you that you should worry,” but she showed sincere interest and concern for all her pupils, and frequently gave extra help to those who needed it.

South Africa gained a direct link with Mabel Ryan through Eileen Keegan. According to Miss Keegan, who was one of her South African pupils, Mabel Ryan was a wonderful person who not only saw to her pupils dance education but also to their welfare, particularly those far from home. Affectation and insincerity were frowned upon, and she considered that festivals encouraged these undesirable qualities, particularly in children.

My first teaching experience was as her assistant in the children’s classes and I shall never forget the tragic day that Miss Craske telephoned me to tell me that Mabel had died, and I must take the class on my own, and not to tell any of the other students. Her early death from cancer was a sad loss to ballet and particularly the Cecchetti method. Those of us who were privileged to be her pupils should be truly grateful to have known a great teacher and wonderful person.

Awards are held annually in her memory, in London since 1949, and expanded to include the Northern Awards in 1980. In South Africa, all Gr. V (Gr. VI) examination candidates who receive Honours (A) or Highly Commended (B) participate in the Mabel Ryan Award competition held in each of the main branches, Johannesburg, Cape Town and Durban and a winner is given the Mabel Ryan Award, which is a medal. In the smaller centres the examiner awards the Mabel Ryan medal on the strength of an outstanding examination.