History of Cecchetti in Australia 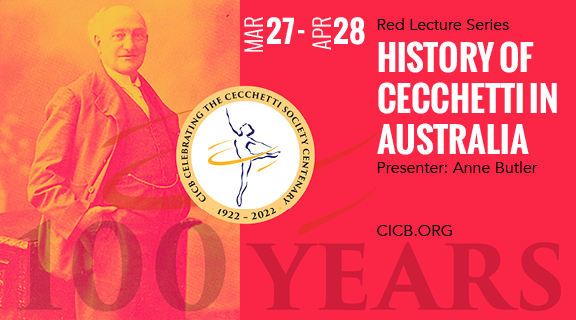 Anne teaches Ballet, History of Dance, Theory and is coordinator of the Cecchetti program at the Victorian College of the Arts Secondary School. As an independent researcher, she has presented for many organizations, including the National Gallery of Victoria, Johnstone Gallery, and CORDS Conference, New York.  Three of her papers appear in Cecchetti Pioneers published Canada, 2014.

Born in England, and after having decided at the age of 7 to follow a career as a dancer, Robina single-mindedly did EXACTLY this for the next five decades, migrating to Australia as a child, and moving through many different styles of dance including ballet and tap, adding singing, choreography and directing to her theatrical repertoire and in later years, becoming a teacher, an advocate for dance and dancers, and an administrator of several dance organizations, including CICB.   She attributes her successful dance career to her Cecchetti training.

She studied at Wollongong University in 1992, achieving her Masters Degree in Creative Arts – Theatre Strand in 1993, and teaching in the Music and Dance Faculty in 2004 and 2005.

She finally performed with the Australian Ballet, at the age of 62, in Graeme Murphy’s new version of The Nutcracker, as one of the “older dancers” and knew then that wearing beautiful costumes and dancing to such beautiful music finally realized her childhood ambition.

In The Australia Day Honours, on January 26th, 2011, she was awarded the OAM for “Services to the Arts particularly in Dance” and in the same year, she received a ‘Lifetime Achievement”  at The Australian Dance Awards so the smile has not left her face since then.