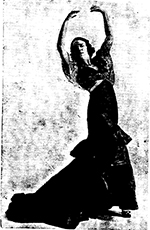 Estelle Anderson, a Fellow of the Imperial Society of Teachers of Dancing, was born in Bundaberg, Queensland, Australia in July 1903, and three of her earliest mentors were Sydney teachers, Minnie Everett, Minnie Hooper and Chrissie Royal.

Estelle Anderson enjoyed a distinguished career as a dancer, choreographer and teacher, and was the Organiser of the Cecchetti Society in New South Wales in the early days up until 1971.

In 1925, Cecchetti’s pupil Errol Addison toured Australia under contract to the Tivoli Circuit. He opened a school in Sydney and taught the Cecchetti system for nearly a year, during which time Estelle Anderson attended classes.

1926 was the year Anna Pavlova made her Australian debut, appearing at His Majesty’s Theatre, Melbourne on 13th March. A letter from Victor Dandre, the husband of Anna Pavlova, dated 13th April, 1926, confirmed that Estelle Anderson was to have private lessons with M. Pianowski, a member of the Pavlova company during the Sydney season.

In the Pavlova Programme for the week commencing April 24th, 1926, Estelle Anderson is listed as one of the marchionesses in the Ballet Amarilla.

After the Pavlova season ended in August, Alexis Dolinoff decided to stay in Australia, and he opened a studio, the Ambassador’s in the Strand Arcade, 274 Pitt Street, Sydney, where he taught the Cecchetti syllabus for two years. Amongst his students were Robert Helpmann, Louise Lightfoot and Estelle Anderson. It was recorded that the fee for a private lesson lasting one hour was 1 guinea, and the fee for six lessons was 5 guineas. Estelle Anderson became Ballet Assistant and taught Beginners and Children and later took over the school when Alexis Dolinoff returned to England.

In 1929, Anna Pavlova visited Australia again, and Harcourt Algeranoff, Edouard Borovansky and Estelle Anderson were listed among the company members.

During the late twenties and early thirties, Estelle Anderson divided her time between Perth and Sydney working as a teacher and choreographer. She worked with Joan Davis, who later won fame in the London Theatre.

Estelle Anderson first introduced the Cecchetti method into Western Australia and during the period 1929 – 1933, she was the official ballet mistress for the new glamorous Ambassador’s Theatre, Perth. In addition to her work at the Ambassador’s Theatre, Estelle Anderson ran a Ballet studio in Murray Street in the city. At her studio, she conducted classes for the Ambassadors’ girls as well as others from corresponding theatres of the ‘Luxor” in Perth, and the ‘Prince of Wales’ in Freemantle.

Estelle Anderson travelled in the East and was inspired by Javanese dance, later utilizing this style in a Ballet which she choreographed, called Javanese Impressions. “Miss Anderson has made an intensive study of Egyptian, Russian, Indian, Oriental, in fact, all styles of dancing, and excerpts from her extensive repertoire will be presented at the Ambassadors”(1928).

According to the press at the time, Estelle Anderson entered students for Cecchetti Grade Examinations in late 1934 in Perth. Molly Lake, a member of the Russian Dandre-Levitoff Ballet Company and a former student of Enrico Cecchetti, was the Examiner.

“Miss Molly Lake, of the Russian Ballet, who is the official examiner for the Imperial Society of Teacher of Dancing, London, conducted an examination in the Cecchetti method of dancing among the pupils of Mamie Jones and Estelle Anderson last Thursday afternoon at Durham House, Hay Street. Miss Lake said she was pleased with the dancing of the students. She had conducted tests contained in the London syllabus of the Imperial Society of Dancing. Six candidates were successful”.

“For the first time in Perth, an examination in the Cecchetti method of dancing was held in Durham House last week. The examiner being Miss Molly Lake of the Russian ballet, the official representative of the Society”.

Miss Molly Lake examined in Sydney at the Swords Club in 1935. Six students entered by Estelle Anderson were successful.

“Miss Estelle Anderson, the well-known teacher of the dance, is delighted that the results of the first examinations conducted in Sydney by the Cecchetti Society have resulted in a hundred per cent pass for her pupils, as the six entered from her studio were the only entrants to gain passes from New South Wales, one of them, Phyllis Beauchamp, also gaining honours in the second grade examination”.

Cecchetti Ballet Examinations continued during the war years 1939-45 and many students entered by Estelle Anderson were examined by Lucie Saronova and Wanda Edwards.

Miss Anderson worked tirelessly for the war effort and the “Sun” Toy Fund was her favourite charity for which in 1941, she choreographed the Snow Queen, a full length Ballet presented at the Sydney Conservatorium with Vera Grist – a pupil of Lucy Saronova, dancing the leading role.

After the war, she received a contract from the Australian Army to train ex-servicemen who wished to make a career of Ballet, many of whom were later employed in overseas Ballet companies.

Estelle Anderson was appointed a Cecchetti Examiner in 1948 and over the years, toured much of Australia and New Zealand in the role of Cecchetti Childrens and Major Examiner.

The Estelle Anderson School of Ballet based in Rowe Street, Sydney, had branches in Haberfield, Lakemba, Kingsgrove and Kogarah and a highlight of the dance calendar was the Annual end of year concert in which every student played a part. The number of students listed in the 1950 programme totaled 98. To name just some of the Ballets choreographed by Estelle Anderson for her students were The Selfish Giant, Pandora’s Box, The Seasons, Gaite Parisienne and The Ugly Duckling.

Rowe Street was the artistic hub in Sydney in the fifties and professional dancers from visiting companies would often take morning classes with Estelle Anderson when in Sydney. This was a unique experience for her “daily students”. The students also had the opportunity to be taught by visiting teachers including Harcourt Algeranoff, Edouard Borovansky and Leon Kellaway.

No class started without a pianist, however Doris Brears, the regular pianist, was often late, so Estelle Anderson herself would sit down and play the piano and teach at the same time. Occasionally she would play for the whole class! Her allegro selections, though limited, were suitably rhythmical.

Rowe Street musicals presented many ‘shows’ including Belle of New York, Katrinka, Lilac Domino, Countess Maritza, Desert Song and Oklahoma. In her role as Ballet Mistress, Estelle Anderson choreographed the Ballets and Ensembles for these productions. Her students danced in the Ballets and sometimes were required to join the ensembles and sing. These shows with orchestra were performed at the Conservatorium of Music, Cremorne Orpheum, and suburban Town Halls.

The first New South Wales Medal test Competition was organized by Estelle Anderson and held in her Studio in Rowe Street in 1955 with Madame Lucie Saronova as the Adjudicator. This competition was originally known as the Mabel Ryan award. In 1963 the name was changed to the Enrico Cecchetti Scholarship Foundation and a new Committee was formed with Estelle Anderson as Chairman. In 2015 New South Wales will celebrate 60 years of Cecchetti medals.

In 1960, Estelle Anderson moved from Rowe Street to 11 Parker Street, Sydney, where she taught until her death in 1971.

Research on the period 1960-71 is ongoing, and the information from former students would be appreciated in order to make this article on Estelle Anderson complete.

In the words of one of her students, the late Elizabeth Russell L.I.S.T.D.

“For nearly five decades, Miss Anderson taught the Cecchetti method of ballet, almost from the time the Cecchetti Society was incorporated with the Imperial Society in London in 1924. She instilled into her students not only her own great love for Classical Ballet, but a love for the Dance and the Theatre in all its wondrous forms”.

Estelle Anderson died in December 1971, a much beloved teacher.