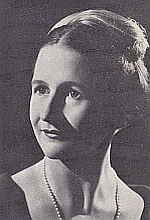 Born in 1908, it was not until Anna Pavlova’s performances at the Old Opera House in Cape Town in 1925, seventeen years later, that Dulcie Howes decided on ballet as her chosen career.

Her dance classes had started earlier with Helen Webb. From Helen B. White, a fellow South African who had studied with Cecchetti and assisted at Webb’s studio, Howes received training that was more substantial. She travelled to London to study the Cecchetti method with Craske, mime with Karsavina, national dance with Derra de Moroda, Spanish dance with Elsa Brunalleschi and toured with Anna Pavlova’s company.

Interestingly, it was not Pavlova herself who auditioned Howes but the ballet master. However, Pavlova received Howes for an interview at her home and she must’ve been impressed by the determined personality that eventually shaped a large part of South African dance history.

After returning to South Africa in 1927, she taught in Johannesburg and Cape Town.

During an official visit to South Africa in 1928, Margaret Craske invited Howes to partake in the founding of the South African Branch of the Cecchetti Society. Howes was also later responsible for establishing the Cape Town branch.

In 1932 Professor Bell, by then the Dean of the Faculty of Music at the University of Cape Town, invited her to open a ballet school attached to the university, the first of such in the world. During the same year Howes moved her school into the billiard room of the once private home donated to the College of Music by the Struben family. In 1934 it officially became the UCT Ballet School and in the 1940’s the former chapel became the ballet studio, until a more spacious disused wartime hangar on Lover’s lane, a stone’s throw away, was designated in 1946.

Howes, an elegant lady of great charm and a persuasive manner, ran the UCT Ballet School and Company, with vision and a tight fist. She was a methodical teacher with a keen theoretical analysis of each movement, and believed in a broad education for ballet students, adding Dance History, Anatomy, Music and other subjects to the curriculum of the Teacher’s Certificate course. Above all, she believed some stage experience was necessary if one were to become a good ballet teacher.

Past pupils such as Pamela Chrimes, David Poole and Dudley Tomlinson, amongst others, returned from successful careers overseas and became teachers within the school while also producing for and dancing with the company. The Cecchetti legacy was retained within the school and Cecily Robinson who taught at the school from 1952 prepared many pupils for the Cecchetti exams.

With the advent of the Government instituted Arts councils in 1963 the UCT Ballet Company began to receive financial assistance from the State. The name of the company changed to CAPAB Ballet (now Cape Town City Ballet) in1965, although it continued to perform for a while under the UCT banner in Cape Town. Howes retired in 1969, handing over the reigns to David Poole.

Howes was presented with the Award of Merit by the Cape Tercentenary foundation in 1953, a year after her ballet Vlei Legend (to music by John Joubert) was premiered, created for the Van Riebeeck Festival and considered the first truly South African work. The Festival of Union Medal followed in 1960, the Gold Medal from the Cecchetti Society in 1969 and a Medal of Honour for the promotion of ballet in South Africa from the South African Academy of Arts and Science in 1970. In 1976 she was awarded an honorary Doctorate of Music by the University of Cape Town. Howes was made a Fellow of the Cecchetti Branch of the ISTD in 1981 and in 1993, the year in which she died at the age of 84, the very prestigious State President’s Award for Meritorious Service (Gold) was presented to her.