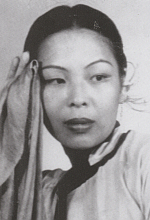 The history of the Cecchetti method in China is inextricably bound up with the personal history of one remarkable woman: Dai Ailian.

Born in Trinidad in 1916, of expatriate Chinese parents, Dai Ailian came to England in 1930. Initially a pupil of Anton Dolin’s, she went on to study classical ballet throughout the 1930’s with Margaret Craske (who had taken over Cecchetti’s London School when the Maestro retired), as well as Modern Dance at Dartington with Kurt Jooss and Sigurd Leeder.

At the outbreak of war, Dai Ailian moved to China, where she began her extensive research into the wonderfully rich traditions of Chinese folk dance. Madame Dai was also one of the first people to perform and teach classical ballet in China. From 1949 she directed the Central Dance and Folk Ensemble and, in 1954, she was the Founding Principal of the Beijing Dance School (now the Beijing Dance Academy).

Having miraculously survived the vicissitudes of the notorious Cultural Revolution, this remarkable lady continued to champion the cause of ballet in China and, on her regular annual visits to Europe and America, Dai Ailian—acting in her advisory capacity to the Chinese government—sought to encourage greater cooperation between ballet in China and ballet in the West. Which is why I was invited to teach in China in January, 2001.

Soviet Russian influence was dominant in the Chinese ballet world, with some excellent teaching as well as staging of the classics. However, initially, Dai Ailian’s teaching in China had been based on the Cecchetti principles she had learnt from Margaret Craske. Following withdrawal from China of all Russian experts and the subsequent wilderness years of the Cultural Revolution, Dai Ailian felt there was a need to return to some of the teaching methods she had learnt in London. As she put it to me, there is an old saying in the East that “when you have lost your way, go back to where you started from.”

So, when I was invited to teach in China, my brief was to re-introduce elements of the Cecchetti method at the Beijing Academy. I found both the students and their teachers greatly interested in the Cecchetti principles and writing in the souvenir programme for the Tribute to Ashton and Cecchetti, Dai Ailian said: “Through Margaret Craske’s teachings I am forever indebted to Enrico Cecchetti, the great Master whose teaching method – passed down by dancers from generation to generation – is so important to the world of classical ballet. We in China are very proud to be part of that great heritage”.

Excerpt from Richard Glasstone’s The Story of Dai Ailian