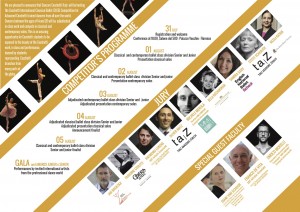 We are very happy to announce that very soon that the website: http://www.cecchettiballetcompetition2017.com  will be online. Devoted to the CICB Competition and Summer Course for Students and Teachers 2017 all competitors, and participants will be able to register online as well as finding information regarding accommodation.

Please find below the competition rules & regulations including lists for solo variations for Junior and Senior competitors and a PDF link.

See you in Florence Italy in August 2017!

A. ELIGIBILITY
1. The competition will be comprised of a junior and senior division.
2. Minimum age 14 and maximum 16 at the commencement of the competition for the junior division and minimum age 17 maximum age 20 at commencement of competition for the senior division.
3. Have passed Cecchetti Intermediate at the junior level and Advanced 1 exam at the senior level, (or equivalent level nomenclature used by each organization)
4. Be a student and not a professional dancer (i.e. anyone who is employed as a full time dancer with a professional dance company. This includes dancers who are not currently employed but have been in the past)

B. CONTENT TO BE ADJUDICATED FOR EACH DIVISION
1. One classical ballet class, on stage, that is adjudicated and open to the audience
2. One contemporary class to be observed by adjudicators but not marked, to be seen on stage and open to the audience
3. Classical ballet solo, from approved repertoire, on stage
4. Solo of own choice, neoclassical, contemporary, or modern genre (hereafter known as contemporary)
5. Contemporary solos in the junior division are not to exceed 2 minutes and in the senior division not to exceed 2 ½ minutes
6. Competitors will perform both solos, and adjudicated ballet class, before any selections are made for the finals
7. Competitors to perform solos in order of their performance number

C. ADJUDICATORS
1. Adjudicators to sign contract in advance
2. There should be either 3 or 5 adjudicators (must be an uneven number, except in exceptional circumstances) with the majority of the panel having classical expertise.
3. One adjudicating panel for the whole event
4. The adjudicators should not have any previous association with the competitors or their studios before or during the competition.
5. All details of age and nationality should not be available to the adjudicators prior to the adjudication taking place
6. The adjudicators should not have been involved in the original selection process
7. Ideally at least one international representative if cost and legal matters allow
8. To be selected for the finals the Judging “weight” will be counted: ballet class 1/3, Classical solo-1/3, solo of choice -1/3 and the selected finalists would perform both solos once again and from those finalists the awards will be chosen.
9. Communications with the adjudicators either by the competitors, teachers, or other interested parties during the competition is prohibited.

E. COSTUMES
1. Costumes worn for the solos are the responsibility of each competitor, with footwear appropriate to the dance
2. Classical grooming and attire is expected for the classical class

F. COACHES/REHEARSAL SCHEDULE
1. Each organization shall receive one complimentary ticket per competitor to all paid events to be given to one coach per competitor by the team manager. Non-finalists receive a complimentary ticket to the final event.
2. Competitors shall have equal access to rehearsals in the studio and on stage as determined by the host organization.
3. All coaches will sign and adhere to the guidelines as established by CICB.

G. GUIDELINES FOR CHAPERONES/COMPETITORS
1. Competitors under 18 must have a responsible adult as chaperone throughout the competition.
2. It is suggested that there is a minimum of one chaperone per 8 children.
3. All competitors will sign and adhere to the guidelines as established by CICB.
4. Each organization will ensure that all competitors have proper documents for travel.

H. ADJUDICATED CLASS
1. Parameters to be determined by CICB and shall be non-syllabus with the addition of the first set of port de bras in the class for juniors and the second set in the class for seniors. The host organization will ensure the faculty is apprised of the guidelines.
2. The classes will be taught prior to the presentation on stage
3. In the adjudicated class, groups should be rotated so that the lower numbers are not always first.
4. The teacher should not be one of the adjudicators

Paquita
Composer: Minkus  Choreographer: Petipa
Any of the female variations

Paquita
Composer: Minkus  Choreographer: Petipa
Either of the male variations