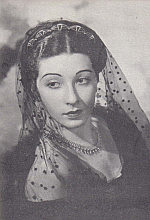 After training as a pupil of Helen Webb, and more seriously with Helen B. White in Webb’s studio Cecily Robinson decided it was time to learn more by going abroad herself, as was the custom to do amongst all serious students of ballet. In 1935 she studied in London with Marie Rambert, joined the London Ballet Club (forerunner of Ballet Rambert), the Woizikowsky Russian Ballet, and returned to Cape Town for eight months to teach for Helen Webb. During her second visit to Europe, she studied with Preobrajenska in Paris and rejoined the Woizikowsky Company, which was taken over by Colonel De Basil. A serious knee injury caused her to give up the stage and on her return to Cape Town she taught at the Hayward School of Dancing.

In 1938 her idea of bringing together all the Cape Town students resulted in the founding of the Cape Town Ballet Club. While dancing with the Ballet Russe Colonel de Basil Robinson carefully learnt as much as she could of the repertoire. Her excellent memory stood her in good stead and was to serve both the Cape Town Ballet Club and the UCT Ballet Company through theatrical masterpieces such as Les Sylphides, Polovtsian dances from Prince Igor, Spectre de la Rose and Swan Lake.

The idea of a school for The Ballet Club materialised in 1945 and was established by Robinson and Yvonne Blake (who had studied with Helen Webb and Dulcie Howes).

The Ballet Club (later to become the South African National Ballet in 1946) did not only provide an opportunity to perform the classics, but gave choreographers Alfred Rodrigues and John Cranko their first break.

When John Cranko’s first work The Soldier’s Tale was performed it was apparently the first time the Stavinsky score was heard in Cape Town, and before the first performance the conductor, Dr Pickerill reminded the audience not to imagine they were “hearing wrong notes most of the time!”

When Robinson married in 1947 and moved to Zimbabwe (then Rhodesia) the South African National Ballet lasted a few more years, with the assistance of Yvonne Blake and Faith de Villiers, until it ceased to exist in 1952. The same year that Robinson joined the teaching staff of the UCT Ballet School. Except for a period of time teaching in her own studio, she rejoined UCT where her valuable knowledge continued to guide students and company members. She stopped teaching in the school and became guest teacher to CAPAB Ballet until a few years before her death in 2003.

Cecily had a way of giving artistic meaning to every exercise she taught, and often the accompanying humour made class with her so much more interesting. How often she used “sit on a pineapple!” when referring to the ‘non-sitting’ at the depth of a plié, and the phrase “your arms look like coathangers!” resulting in quick postural correction. Cecily’s beautiful use of the upper back bend was accompanied by a soulful expression within the perfect placement of the head and port de bras. Her classes not only emphasised the importance of highlighting the rudimentary physicality in basic technique, but a culmination of physical and artistic involvement as if preparing one for the demands of great choreography. She made one feel that class was part of the theatrical experience.

A dancer’s development may be attributed to more than one influential teacher, a significant producer or an extraordinary choreographer. But it’s the great traditions of ballet unselfishly handed down from generation to generation by truly dedicated and caring disciples who were responsible for many Cape Town trained dancers who achieved international fame such as, to name but a few, David Poole, Patricia Miller, Johaar Mosaval, John Cranko, Frank Staff and Alexis Rassine, all products of the Cecchetti legacy.

Written by Eduard Greyling, July 2007, with sincere thanks to Mollie Webb (librarian, ISTD headquarters in London) for providing the information on Robert Morris Crompton.